“It is important that all of us accept our ability to hold different opinions. We are on a roll of sovereign nations that are regarded as equal in terms of the United Nations Charter . . . We might differ in terms of economic power and economic ability to influence development in different parts of the world but what will make the world work is if we respect each other.” —  Minister Naledi Pandor

The U.S. Secretary of State, Antony Blinken, has just finished a tour of Africa. The tour included stops in South Africa, the Democratic Republic of Congo, and Rwanda. Blinken visited each of the nations with different purposes and objectives depending on the state of affairs in each country.

Blinken’s Africa trip began when he arrived in South Africa on Sunday, August 7th. During Blinken’s stop in South Africa, he met and engaged with South African Minister of International Relations and Cooperation Naledi Pandor. The meetings between the two diplomats included discussions on trade, investment, climate change, and technology among several other topics.

Blinken was granted the platform to give a lecture on U.S.-Africa strategy at the University of Pretoria on Monday, August 8th. His lecture touched on a multitude of subjects. He called on the people of Africa to embrace democracy as envisioned by the United States. He claimed that the people of Africa were big supporters of democracy.

“This is not our demand or insistence on democracy, it’s what people in Africa want, it’s clear in poll after poll, they want openness, they want it on an individual basis, as communities, and to choose their own path [as nations],” Blinken said in Pretoria. He further touched on how failing democracies lead to instability that leads to terrorism and violence.

The U.S. Secretary of State visited Africa at a rather curious time. Blinken’s tour comes a few weeks after Russian Foreign Minister Sergei Lavrov’s visit to Africa, amid accusations that the two superpowers are grappling over domination in Africa.

The United States and Russia are currently in a tense political stance that is inevitably worsened by the war between Russia and Ukraine. The United States is an ally of Ukraine, supplying the eastern European nation with weapons and financial aid, behavior that is seen as provocative by Russia. 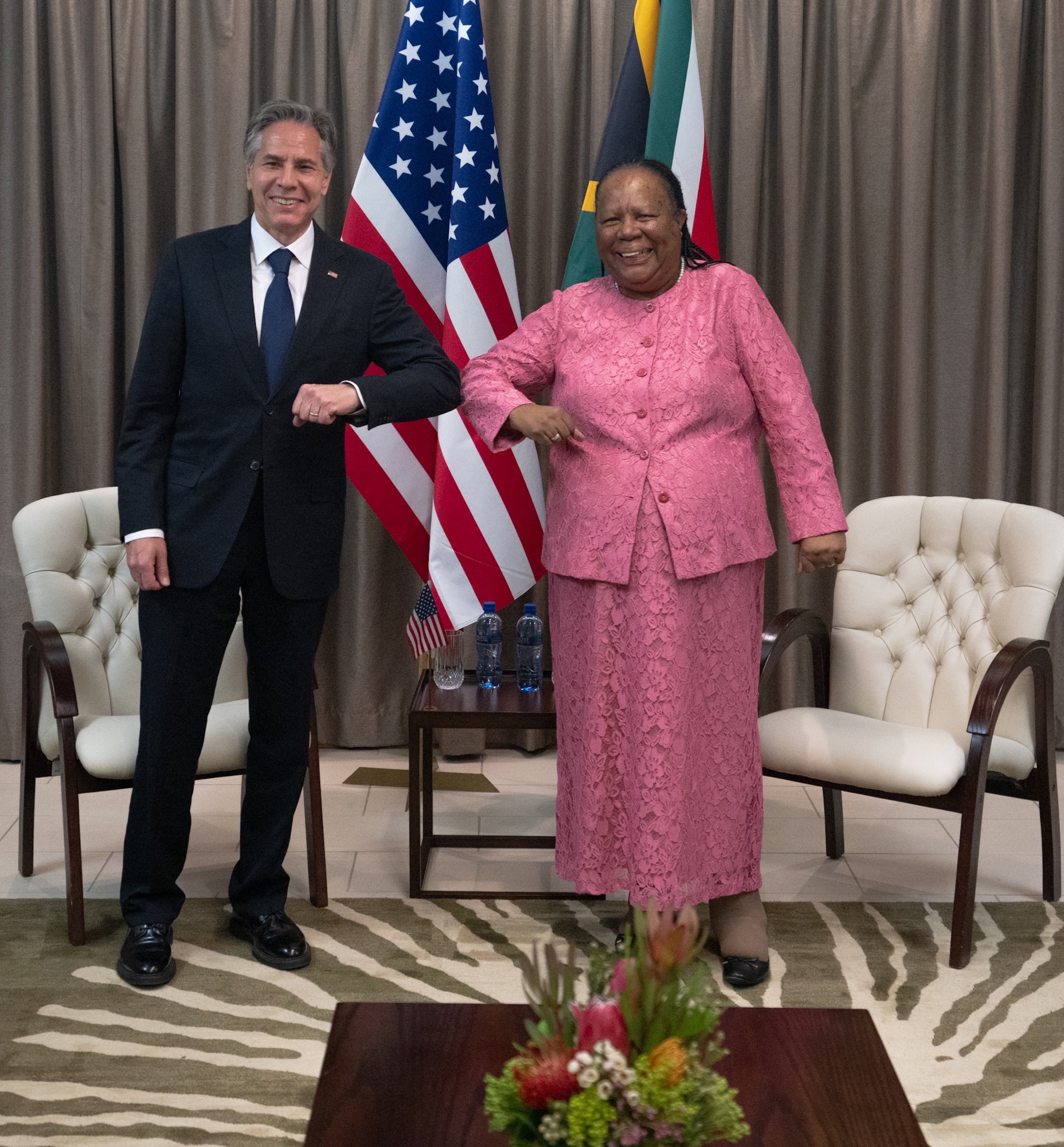 Some see these visits as a means of superpowers asserting control over Africa. Blinken denied this assertion, claiming that Africa was not a playground being fought over by superpowers. “The United States will not dictate Africa’s choices, and neither should anyone else,” Blinken said.

Naledi Pandor was eager to make the point that South Africa is a country that stands as its own nation. “It is important that all of us accept our ability to hold different opinions. We are on a roll of sovereign nations that are regarded as equal in terms of the United Nations Charter,” she told journalists.

“We might differ in terms of economic power and economic ability to influence development in different parts of the world but what will make the world work is if we respect each other.”

Pandor did not mince her words as she expressed how there was an element of bullying coming from certain European countries as well as the United States. This was in relation to the war in Ukraine, a war that certain African countries, including South Africa, did not expressly state an anti-Russia position.

This has led to powerful countries implying the idea that African countries should support Ukraine or suffer the consequences. “I’m glad that Secretary Blinken has confirmed that America is not asking us to choose. I don’t recall any attempt by the United States to do that.

But in terms of our interaction with some of our partners in Europe and elsewhere, there has been a sense of patronizing bullying toward ‘you choose this or else,’ and the recent legislation passed in the United States of America by the House of Representatives we found a most unfortunate bill that we had hoped the media would say more about. Because when we believe in freedom – as I’m saying, it’s freedom for everybody – you can’t say because Africa is doing this, you will then be punished by the United States.

So that’s been a disappointing passage of legislation by one house, and we hope the other house will not agree to such offensive legislation,” Pandor said.

The three global superpowers that are China, Russia, and the United States have been looking to make their presence stronger in Africa. China has a strong economic presence on the continent and is known to have strong relationships with countries such as Zimbabwe.

A Russian military unit with alleged ties to the Kremlin, the Wagner Group, is present in western African countries such as Mali. The United States has economic and political relationships with several countries on the continent.

Chris Ogunmodede, an editor at World Politics Review, made the point that the United States should have genuine intentions in Africa. “If it’s about competing with China (and Russia) in those terms, it’s going to fail. It’s not about what Africans want. It’s all about what Washington wants. That’s not a partnership,” Ogunmodede said.

As part of the Blinken trip to South Africa, an event was held at the United States Embassy in Pretoria on Tuesday, August 9th. However, a South African journalist, Sophie Mokoena alleged that she was denied entry to the venue where the event was held.

She claims she had all the necessary documentation such as accreditation and an invite. Mokoena is the senior foreign correspondent for the South African Broadcasting Corporation. She was also present at the press conference with Naledi Pandor and Antony Blinken held on August, 8th. It is not clear why she was denied entrance to the venue.

Resurgence of Cholera Has Killed 200 People in Cameroon

Senator Gillibrand to Give over $1.3 Billion to Puerto Rico to Fund Food and Electricity

Resurgence of Cholera Has Killed 200 People in Cameroon