In an effort to move towards cleaner forms of transportation and reduce the carbon footprint, New York City officials announced on Tuesday, November 1st that the city will be buying 51 electric buses. According to city officials, the electric buses will be in operation by next fall. The finances to fund the project will come from an $18.5 million grant from the Environmental Protection Agency. The disbursement of funds for the project will be possible because of the Bipartisan Infrastructure Bill. 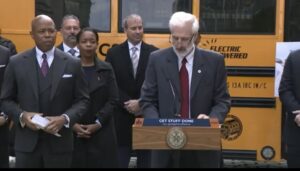 The buses, which will be powered by batteries, will be much quieter compared to the current school buses that are equipped with diesel engines.

According to Gothamist, the city operates around 5,000 diesel-powered buses and is looking to reduce that figure to zero by 2035.

“By celebrating the transition to zero-emission school buses that are far better for our children, we’re creating a better future for our children,” said Mayor Eric Adams as he presented one of the buses.

The city will be able to convert six or seven-year-old diesel-powered buses to electric power. For New York City to completely shift to operating electric school buses, it would cost $5 billion according to Robert Reichenbach, president of Bird Bus & Sales. Reichenbach’s company is advising the city on the operations, charging systems, and conversion of old buses.