“We’ve identified a proven leader who will be introduced to the school community soon and will spend this year getting to know both the opportunities and challenges that exist for the current student body and recruit more families to join in revitalizing the school,” said Chyann Tull, spokeswoman for the DOE. The Department of Education further clarified that there would be no changes to the school’s admissions, meaning that anyone may apply for a seat at the school and that no one was barred from being admitted.

A New York Daily News article on the matter sparked a debate as it implied that perhaps the children of the affluent were indeed receiving favorable treatment. The high school, which is located in the Washington Irving Campus between 16th and 17th street in downtown Manhattan near Gramercy Park, is currently severely under-enrolled with a total enrollment of 212 students and only 28 ninth-grade students enrolled for the 2021-2022 school year. In the last six years, the school has lost almost 50% of its enrollment. Several parents in the city did not agree with the idea implied in the article, expressing that the betterment of the school was a good development for all students.

The high school will be offering Advanced Placement (AP) courses including AP English Literature, AP Computer Science, AP World History, AP Comparative Government, and AP Psychology. The school has also accelerated the Global History regents offering the course in one year instead of two so that students can have the opportunity to move on to AP World History, US History & Government, or AP US History.

Lucas Liu, president of Community Education Council District 3 in Manhattan, welcomed the changes saying, “The transformation of High School for Language and Diplomacy is a win-win for all students and the DOE. By enhancing the curriculum, new and current students will have access to AP classes and improved programming. In addition, more students will be attracted to Language and Diplomacy which has been struggling with enrollment and projected to have only 137 total students when school starts Sept 8th. This is a step in the right direction by the DOE to better meet the academic needs of more students. Hopefully, the DOE will continue to expand on this plan next year.”

Quiann Simpkins, a Brooklyn parent, and founding member of the NYC School Safety Coalition said, “You would think at a time when our children have suffered severely from the pandemic, especially when it comes to education, that a principal with an effective track record of excellence bringing advanced curriculum courses and a higher level of education to a school would be widely received.  Unfortunately, there are individuals who have low expectations of our children and believe that our black and brown children will not be able to rise to the occasion.  Where is their support for better learning methods that will advance our children or are they only anticipating their failure?”

“The absurd idea that making a High School better is problematic or classist is a typical Social Justice journalism position. All High Schools should offer challenging coursework that attracts and retains families. The Chancellor should be applauded for this effort not accused of catering to “affluent” parents—improving schools caters to all parents,” said Maud Maron, a parent of rising 11th, 9th, 7th, and 1st-grade students in Manhattan’s District 2, referring to the contents of the article.

Jean Hahn, co-founder of Queens Parents United said, “I’m optimistic this could be a great way to turn around schools with declining enrollment while also answering calls from families who want rigorous academics in our public schools.”

“With just 28 students in last year’s class, both funding and programming limited the academic and extracurricular offerings. We are certainly not providing a good high school experience for these students. It is promising that the DOE placed a new principal with a track record of leading successful schools and a vision of bringing more accelerated course offerings. It’s a new option for 9th graders who are not happy with the schools they got assigned and a boost to the entire school community,” said Yiatin Chu, president of Asian Wave Alliance and cofounder of PLACE NYC.

UPDATE FROM THE PRINCIPAL:

Read this article in the LittleAfrica Newspaper distributed in newsstands and bodegas in over 400 locations throughout New York City.  Click here for our digital newspaper. 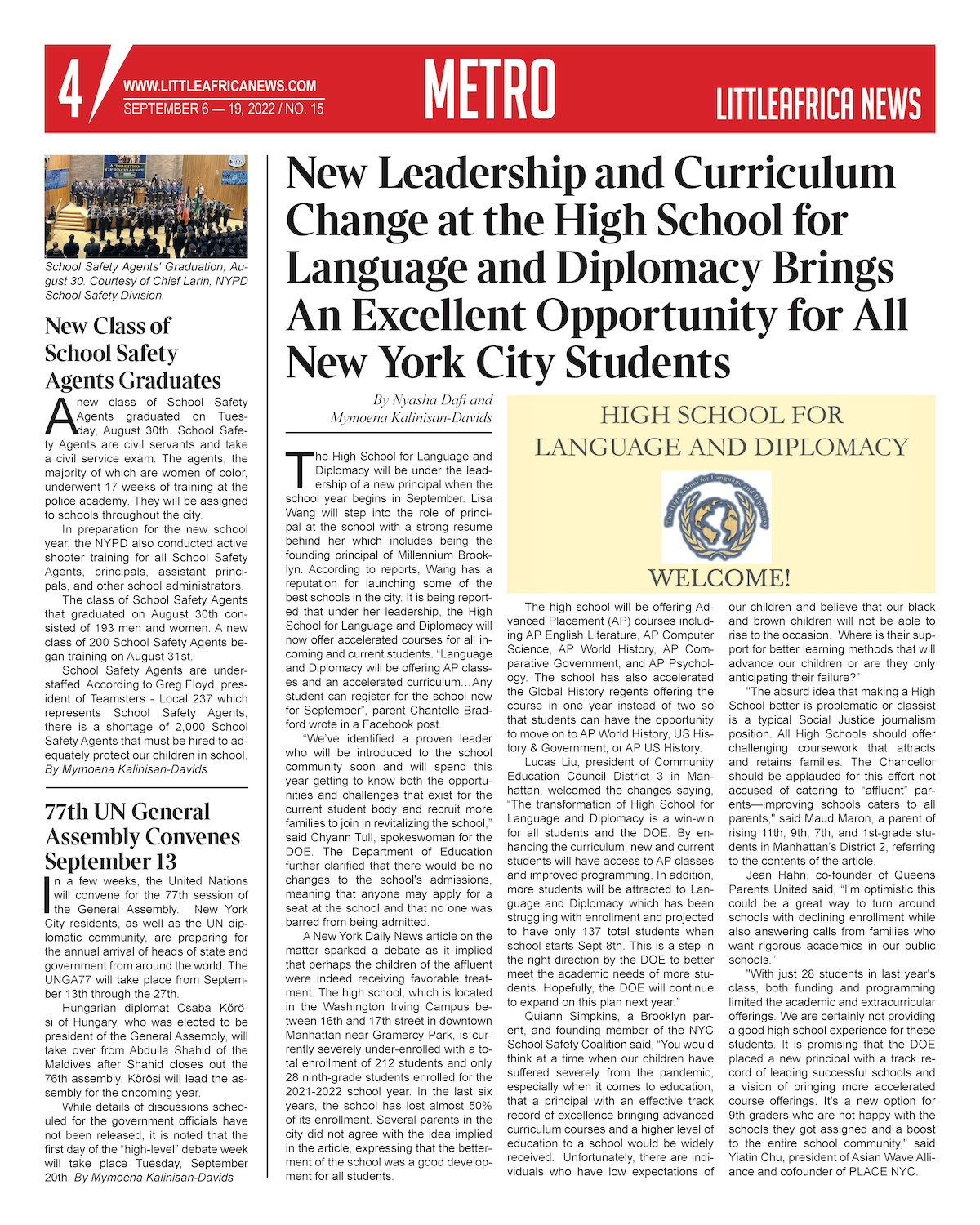