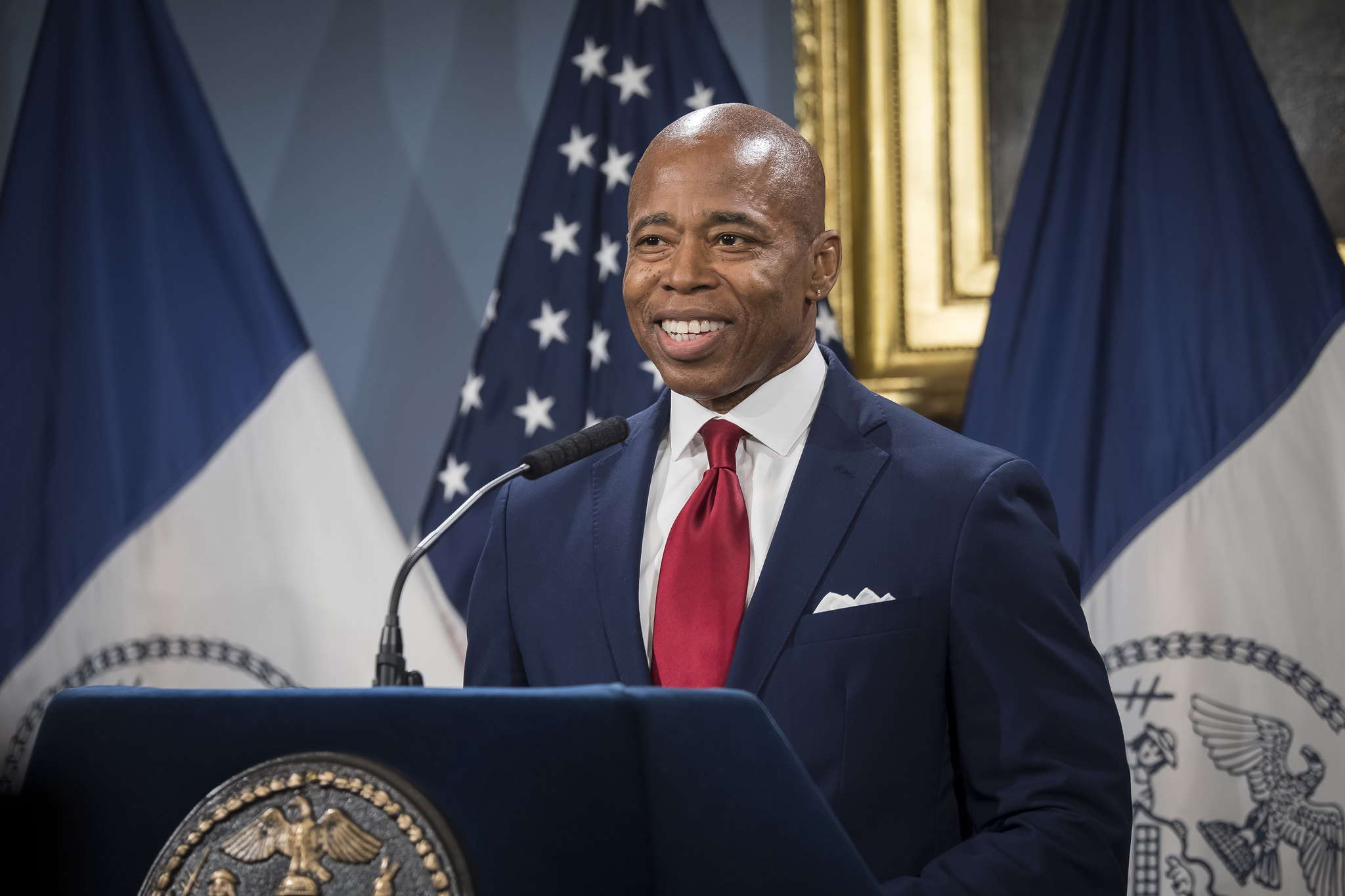 Eric Leroy Adams, the 110th Mayor of New York City and only the second black person to hold the position, is a true native of New York. He was born on September 1st, 1960 in Brownsville, Brooklyn. He spent a part of his early life living in Bushwick, Brooklyn. The Adams family lived a life of poverty in a building that suffered from many issues, one being rat infestation. Adams’ mother, Dorothy Mae Adams, worked two jobs while his father, Leroy Adams, was a butcher. Dorothy Mae Adams worked in the borough of Queens and she had long realized that for her family’s prospect to improve she had to move to a better area and better neighborhood than the one they lived in. She managed to put together finances for a down payment and in 1968, she moved her family to South Jamaica in Queens. The move to South Jamaica was one filled with hope and optimism but things are not always as easy as one would like. After the move, Adams’ mother lost one of her jobs. At about the same time, his father Leroy left the family. Being a single mother is never easy and Adams’ mother struggled.

When Adams was around 15 years old, he and his brother were arrested for criminal trespassing. The brothers had gotten into the habit of assisting an injured neighbor of theirs by running her errands as well as buying groceries. Unfortunately, when it was time to pay the boys, the woman called the police on them and they were arrested. While in handcuffs in the basement of a police precinct, surely filled with fear and worry, the brothers were assaulted by white police officers. Adams spent a few days in juvenile detention for the crime. These events led to Adams experiencing post-traumatic stress disorder. He has reportedly claimed that there were times he would hear the sirens of police vehicles and instantly go back to the day he was assaulted by police officers. It was a traumatic experience but it planted a seed in Adams. He became determined to change how things were done in the police department. He planned on doing this by becoming a police officer. Adams received encouragement to walk that path from a man he considers his mentor, Reverend Herbert Daughtry. Even without the encouragement from Rev. Daughtry, Adams found law enforcement attractive. He admired the manner in which some police officers carried themselves, with a certain swagger he believed.

Adams holds a number of qualifications from educational institutions in New York. He studied at Marist College, New York City Technical College, and the John Jay College of Criminal Justice. Academics had never been a strong point of the new mayor. He shares tales of struggling academically and being a D student. It was an aspect of himself that frustrated him for a long time until he discovered what the problem was. It was while he was in a library at John Jay College that he overheard a documentary on learning disabilities. This allowed him to do research and discover ways he could improve his learning abilities. Adams was diagnosed with dyslexia. Now that he knew what he was dealing with, it made it easier for him to study. He began excelling academically.

Adams started off in the New York Police Department with the idea of fighting the problems with the force from within. He was known for being vocal, fighting against racism and other issues. He started the 100 Blacks in Law Enforcement Who Care, a group that spoke out against police brutality in the most affected area, the black community. There was a lot of potential in him and he could feel it. From being a captain in the NYPD, he went on to become a state senator. He took another step in the political space and became Brooklyn Borough President. His desire was to make the city a better place for its citizens and he tried to do that with every step he took. Adams participated in the Democratic Primary in order to finally take his place as candidate for Mayor of New York City.  Adams ran on a campaign for a safer, rejuvenated city with better policing. He won the election and was inaugurated at Times Square on New Year’s Day 2022. He had the look of a man who had achieved all he had yearned for.

The New Year began in New York with a new Mayor. It was the epitome of what most would call a new dawn, but it was the beginning of a difficult time in the city of New York. A number of crises have already presented themselves including a number of fatal shootings taking place all across the city and the horrific fire in the Bronx that took 17 lives.

Mayor Adams has nevertheless persisted, showing that he is a willing and present leader who is not apprehensive about being on the ground across the city. One of his promises is to deal with the crises that the city finds itself fighting. So far during his tenure, he has signed an executive order that reduces city fines on small businesses. Adams has appointed five women as deputy mayors and also hired New York’s first-ever female police commissioner, Keechant Sewell. Adams has been commended for the good he has done but like with all things in politics, there are fans and critics. The mayor has been criticized for a number of things. Two of the appointments he made raised eyebrows. He hired his brother as the head of his security detail, an action that can be classed as nepotism. The hiring of Phillip Banks III as deputy mayor of public safety was also criticized by some because Banks had been embroiled in a federal corruption investigation that forced him to retire in 2014 from office as an NYPD commander. There has also been criticism for Adams wanting to bring back the stop and frisk policy. He also wants to bring back a shelved practice of anti-crime plainclothes police officers, a policy that had resulted in unwarranted shootings.

Most recently, Adams announced in a policy speech, The Blueprint To End Gun Violence, that he wants to decrease the number of School Safety Agents and replace them with violence interrupters.  This came as a surprise to many since a week ago, Adams shared a video on social media effusively praising School Safety Agents and emphasizing their relationships with families and the fact that they are majority Black and Hispanic women.

There already is a shortage of School Safety Agents. School Safety Agents are 70% majority Black and Hispanic women. They are mothers and grandmothers from our communities. Violence interrupters are mostly former gang members and criminals who have reformed their lives. They seek to engage youth and stop them from going down a dangerous, criminal path. A laudable effort indeed.

In New York City, violence interrupter programs, mostly funded by the Mayor’s Office, have failed to stop the rampant gun violence in our communities resulting in over 21 young Black men being killed in under one year. Black and Hispanic communities are under siege, parents are terrified to let their children go to the store or to the park. Baltimore, Philadelphia, Chicago, and New York are proof that violence interrupter programs do not work.

What does work is our School Safety Agents. The evidence and data on their efficacy in protecting New York City Public School students, teachers, and staff in schools are clear. School Safety Agents are civilians and take a civil service exam. They go through 17 weeks of training at the Police Academy with the number one police force in the world.

It is this training that equipped School Safety Agents to confiscate at least 13 guns with bullets since the start of the school year in September 2021. Hundreds of other weapons including knives, machetes, and brass knuckles have been confiscated as well. School Safety Agents have stopped at 13 potential school shooting tragedies. We know they are effective.

Adams is vegan, a lifestyle he began practicing after he was diagnosed with type 2 diabetes. He claims that this change has led to him losing unhealthy weight and sending diabetes into remission. We hope Adams will introduce more healthy food options in New York City Public Schools.

With many years ahead of Mayor Adams’ term, time will show his efficacy as mayor of New York. We are rooting for you Mr. Mayor. We want you to be successful.