Mayor Eric Adams signed a package of childcare bills on Wednesday, November 9. Adams signed into law seven bills that will ensure the assistance of families, mothers, and caregivers with childcare. 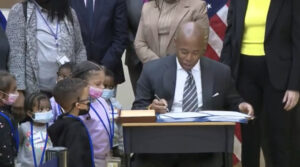 “From the beginning of our administration, we have fought for greater access to childcare and investments in early education to support New York City families. When we announced our childcare blueprint, we said that we were going to tackle our childcare needs head-on and make sure that we provide services and support to those who need our help the most. Today, we are signing a package of seven childcare bills to reaffirm our administration’s commitment to our city’s families and children and to say to working mothers and families that you are not alone,” said Mayor Adams.

“Raising a family in New York City should not be impossible, and today we are providing families with the support of an entire city in helping to raise their children. We know that nothing holds back opportunities or success at work more than lack of childcare in this city, so this slate of legislation will even the playing field by supporting mothers and families,” he continued.

The seven bills were each drafted to ensure childcare is easily accessible. Most of the bills will see the installation of several different entities that will assist with childcare. One of the bills will see the set-up of a task force that will look at viable ways to reduce the cost of childcare, increasing funding and make it easily accessible for families. The setting up of a website that shows the locations of various childcare is a requirement in one of the other bills. Some of the bills fulfill Mayor Adams’ “Accessible, Equitable, High-Quality, Affordable: A Blueprint for Child Care & Early Education in New York City,” which is his vision for providing quality child care.