by LittleAfrica Staff Writer
in U.S.

Los Angeles City Council President Nury Martinez announced she would be resigning on Monday, October 10th. Martinez’s resignation comes amidst the leaking of a conversation she had with a group of colleagues in October 2021. The people who took part in the conversation were other council members, Gil Cedillo, and Kevin de Leon. The Los Angeles County Federation of Labor President, Ron Herrera, was part of the conversation as well.

The audio clip of the conversation became public after it was leaked on Reddit. The audio caused a storm in the Los Angeles political scene as it contained a number of racist and insensitive remarks from some of the people involved in the conversation. Martinez makes several racist comments in the clip, claiming that Councilmember Mike Bonin, a white man, “thinks he’s f******g Black.” She went on to call Bonin’s son, who is Black, “parece changuito” which translates to “he’s like a monkey.” Martinez said that Bonin was treating his son “like a little white kid” and that “this kid needs a beat down. Let me take him around the corner and then I’ll bring him back.” 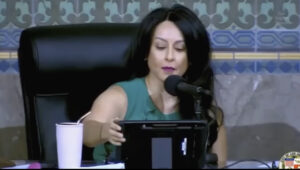 Martinez resigned as President of the LA City Council after her remarks caused an uproar in the city. “As a mother, I know better and I am sorry,” Martinez said in a statement released on October 10th. “I am truly ashamed. I know this is the result of my own actions.” Martinez apologized to Bonin and his family for her racist statements. “I’m sorry to your entire family for putting you through this.”

According to reports, Kevin de Leon made a racist statement as well, claiming that Bonin treated his son “like an accessory” in the same manner Martinez would carry her handbags. De Leon apologized too. However, Bonin and his family released a statement condemning the actions of those who had made racist remarks. “We are appalled, angry, and absolutely disgusted that Nury Martinez attacked our son with horrific racist slurs, and talked about her desire to physically harm him. It’s vile, abhorrent, and utterly disgraceful,” the statement said. “The conversation revealed several layers of contempt for the people of Los Angeles, and a cynical, ugly desire to divide the city rather than serve it,” the statement added.

While Martinez resigned from her role as president of the LA City Council, reports indicate she will continue as a council member. She represents Los Angeles 6th District, which includes Panorama City, Hollywood, and parts of San Fernando Valley.