by LittleAfrica Staff Writer
in Africa

Kenyan President William Ruto stated on Wednesday, November 2nd, that Kenya had deployed troops to the Democratic Republic of Congo (DRC) as part of a regional military action to support the Congolese government against insurgents operating in the eastern DRC.

At a ceremony in Nairobi, President Ruto stated, “As neighbors, the fate of the DRC is linked to ours.” He also mentioned that the “regional contingent also includes troops from Burundi, Uganda, and South Sudan, sent on a mission to protect humanity.” 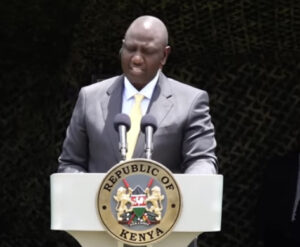 He added, “We will not allow any armed groups, criminals, or terrorists to deny us our shared prosperity.”

In order to help the region regain its security, East African Community (EAC) officials decided to form a joint force in April of this year.

Following the protests in Kinshasa, the Democratic Republic of Congo’s capital, against Kigali’s participation in military operations inside the DRC, a Rwandan detachment will be stationed along the border.

The number of Kenyan soldiers participating was not disclosed by military officials in Nairobi due to “obvious security concerns.”

The United Nations Organization Stabilization Mission in the Democratic Republic of Congo (MONUSCO), which began operating in the country in 1999, is still present in the nation.

Earlier, at the request of the Congolese government, Uganda and Burundi also dispatched soldiers to the DRC.

The M23 rebels, a largely Congolese organization, began fighting in late 2021 after going years without engaging in combat.

In the North Kivu region of the DRC, recent militia advances prompted the UN peacekeeping operation to step up its alertness and support for the Congolese army last month.

Relations in central Africa have suffered significantly as a result of the M23’s resurgence.

Despite Kigali’s denials, the DRC accuses Rwanda of supporting the militia.

Kinshasa made the decision to oust the ambassador of Rwanda on Saturday. In turn, Kinshasa was accused by Rwanda of being “on the path of continued military escalation.”

The African Union has requested a truce in response to the international community’s alarm over the rise in violence.”

Biden to Remove Burkina Faso from the US-Africa Trade Pact