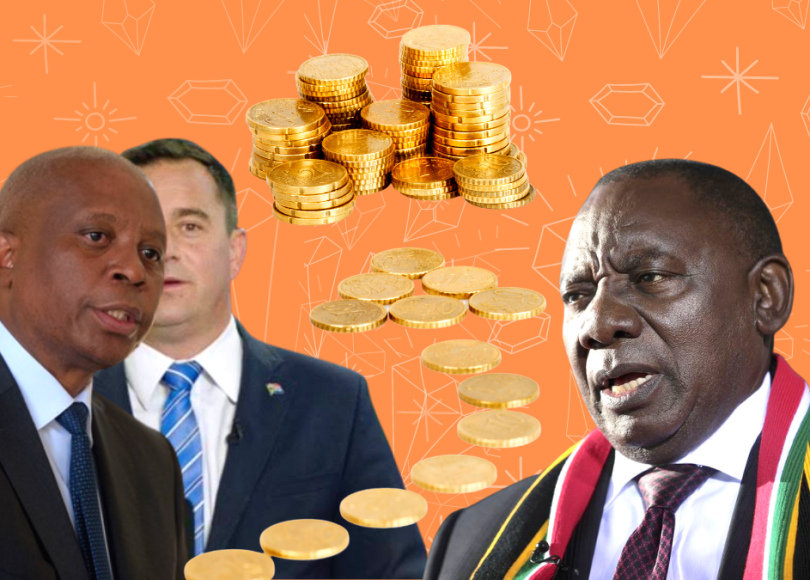 Over half of all declared political party funding in South Africa comes from three families, the Oppenhiemers, the Motsepes, and the Moshals.  This represents a democratic crisis.

On Thursday 18 November, in line with the Political Party Funding Act (PPFA) 6 of 2018, the Electoral Commission of South Africa (IEC) released the donations to political parties during the second quarter which ran from July to September of 2021.

This fundraising quarter was critical as it was the quarter just before the November 1 local government elections and these donations would have had a major effect on the performance of parties in the elections.

Here is a snapshot of where the money went and where it came from:

ActionSA raised 16.9 million. R 10 million came from the Oppenheimer family. The daughters of Mary Slack namely Jessica Slack Jell, Rebecca Oppenheimer and Victoria Freudenheim collectively donated a combined R10 million to ActionSA in the second quarter. Mary Slack is the daughter of Harry Oppenheimer and heir to the Anglo American and DeBeers fortune. The other large donor to Action SA was once again Martin Moshall who contributed R5 million to Action SA.

The Democratic Alliance (DA) raised R16,86 million. The majority of the contributions came from Martin Moshall who contributed the maximum amount allowed in a year for a single party, namely R15 million. Curiously Naspers donated an amount of R1 million to the DA as well.

A comparison to the previous quarter shows that the DA and ActionSA have an identical donor pool. The Oppenheimer family and Mr Moshal. In the first quarter the DA’s single largest donor was Mary Slack. Her contribution of R15 million amounted to 94% of the party’s declared donations for the quarter where the party raised R15,98 million.

In the second quarter it appears that the donations switched with the Oppenheimers donating to Action SA and Moshal maxing out his DA donation.

Mr Moshal was born in Durban, and studied finance and computer science at the University of Cape Town, graduating in 1992. Moshal built his wealth on online gaming software primarily through a company known as the Microgaming company, which he remains a major shareholder of. By the mid-2000s, Microgaming was said to supply more than a third of the online gaming market and clients estimated it was bringing in more than R7,855 billion in revenue annually.

Mr Moshal is also a shareholder in the online gambling company Betway.  Mr Moshal first became involved with Betway after its website was created in 2002, when he helped set up its poker and casino platform. He currently lives in the United Kingdom.

The media should not fund political parties.

Naspers made a contribution of R 1 million to the DA. This appears to be a declaration of support and a conflict of interest.

It is curious that Naspers would be involved in funding political party activities considering its chequered history as a media arm for the aparthied regime. Naspers was founded in 1915 for the purposes of advancing the cause of Afrikaner Nationalism and the nationalist party received donations from the company over many years.

The conflict of interest arises from the fact that the media has a role to investigate, to examine and report on the activities of political parties, when that media house actively supports one of the political parties, this likely means that some parties will receive harsher coverage and the preferred party will not. The ethical concerns are quite significant.

Naspers has a large impact on the political and social conversation of the day and is the mother company that owns the following news media brands:

In the English premier league soccer referees are not allowed to officiate games of soccer teams they support, or games of team rivals. This is to maintain the credibility of the decisions they make on the pitch. The news media is meant to play this role as well, to remain above the fray, so that people can trust the calls that are made, however this move will erode the public confidence in the media even further.

We should all be concerned by the impact special interests have on the democratic system. Special interests compromise the accountability mechanism of democracy, they are the most likely actors to capture the levers of political power for their own ends.

The effect of money in politics is as follows: politicians need to earn an income to live and they need to campaign and win to get into power. Campaigning costs heaps of money, money for posters, adverts, digital campaigns, vehicles, call centres, t-shirts, lots and lots of t-shirts. Donors offer funding for these things and this in turn becomes their ticket to the decision making table of political organisations. Donations come with the unstated threat that they could be withheld or transfered to other people and other parties if you are donor interests are not taken care of. This creates the basis of the donor – politician dance and it is a dance that does not serve democracy well.

While many human motivations are not easily discernible, those of capitalistic organisations often are. Corporations are self interested and the owners and shareholders of a corporation are driven by a profit motive, they aggressively seek to minimise costs, maximise profits, reduce regulation and get preferential contracts. They are willing to give politicians financial support to gain favour to maximise their position on the market. The agenda of corporate donations to politicians is to gain favourable treatment and favourable regulations to achieve their aims.

Rather than accounting to the voters and party supporters, large donors often create an alternative accountability mechanism within the political organisation. One which cannot be accessed by general members, one which cannot be easily reviewed.

The effect of money in politics is as follows: politicians need to earn an income to live and they need to campaign and win to get into power. Campaigning costs heaps of money, money for posters, adverts, digital campaigns, vehicles, call centres, t-shirts, lots and lots of t-shirts. Donors offer funding for these things and this in turn becomes their ticket to the decision making table of political organisations. Donations come with the unstated threat that they could be withheld or transfered to other people and other parties if you are donor interests are not taken care of. This creates the basis of the donor – politician dance and it is a dance that does not serve democracy well.

There is no doubt that special interests have an undue and disproportionate influence on political party funding in South Africa. It cannot be sustainable or healthy that major political parties receive such large amounts of money from such a small group of individuals.

Jamie Mighti is an analyst and researcher focused on the fields of Law, Business and Politics. He shares his inputs on various national media platforms. He holds a LLB from Wits University and a PDBA from Wits Business School. Jamie is an award-winning debater and has won the top trophy at the African Universities debating championships three times. He writes in his personal capacity.