On Thursday afternoon, September 29, Lt. Alison Russo-Elling, 61, an EMS lieutenant and 25-year veteran who responded to the 9/11 attacks, was fatally stabbed in Queens by an assailant.

The police reported that it occurred around 2:15 p.m. while she was working at Station 49 on 20th Avenue and 41st Street in Astoria.

Russo was taken to Mount Sinai Queens Hospital, but she did not make it.

The assailant was apprehended and taken into custody after hiding inside a nearby building.

Acting FDNY Commissioner Laura Kavanagh said, “She was stabbed multiple times while outside her station in a barbaric and completely unprovoked attack.”

She added that “To be attacked and killed while performing their job of helping and saving other people’s lives is both heartbreaking and enraging for our department in ways I can’t describe.” 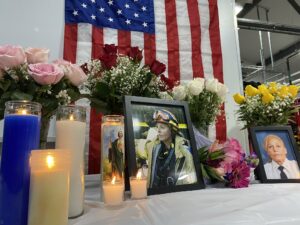 Mayor Eric Adams expressed his condolences to the victim’s family, coworkers, and the entire city of New York, saying, “We lost one of our heroes.”

Police Commissioner Keechant Sewell stated that “this deadly, senseless, broad daylight attack on a uniformed EMT member is a direct assault on our society.”

He added, “We can never tolerate this violence in our city. It has to, and will, be stopped.”

Alison Russo will be remembered for her wonderful sense of humor, kindness, and dedication to humanity and the people of New York City.