Zinat Hossain, A Hunter College of Bangladeshi Descent, Crushed Under a Train

A Bangladeshi College Student, Crushed Under a Train…

Zinat Hossain, a 24-year-old Bangladesh-born young woman who was a Hunter College student, died after allegedly falling underneath a moving subway train in New York City. Enamul Haque, president of the Greater Comilla Association in New York, confirmed that she was crushed under the train at approximately 9 p.m. on Wednesday, May 11th.

On Wednesday night, police discovered the 24-year-old’s body beneath a train at the 55th Street Station in Brooklyn. She lost her life on her way home from school. According to media sources, Bangladeshi community leaders have already met with New York Police Department in Brooklyn about the event, as terror gripped them. Hossain’s death was ruled a suicide by local police authorities. However, her family and the Bangladeshi community in the United States disagree with the findings.

President Haque of the Greater Comilla Association said they, too, learned from media reports that she was attacked. “We were not sure what exactly had happened to her as police have contacted us and would [later] detail everything,” he said.

Before Hossain’s funeral prayers at the Baitul Jannah Mosque in Brooklyn on Saturday afternoon, her grandfather Mohammed Kabir told reporters, “The police report says Zinat committed suicide, but we don’t believe it.” He further stated, “They said she ‘died due to the fall’. But in actuality, this was a ‘hate crime’. Our community must unite in protest against this.”

Following her death, a video of an unrelated event on October 24, 2019, began circulating on social media, with some believing it to be evidence or footage of Zinat’s death. Some media sources used the footage, which showed muggers stealing a person’s bag and forcing them onto the railway tracks, incorrectly in their coverage of the college student’s death. 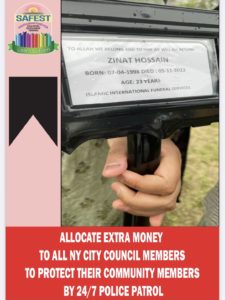 Hossain’s family moved to the United States in 2015. She lived with her parents and her brother on 42nd Street and 8th Avenue in Manhattan.

Media sources have also alleged that Hossain’s uncle claimed the family would be organizing a protest and press conference to expose the “truth” and reject “the police cover-up.”

A rally has also been scheduled in front of the New York City Mayor’s Office at City Hall by the South Asian American Fund for Education and Training in protest of Hossain’s murder.

The South Asian American Fund for Education and Training organization’s chief Mazeda Uddin has called for expatriates to join the demonstration to demand a probe into Zinat’s death and public safety.

“Are there not subway video cams, no eyewitnesses? How can we allow a subway death go uninvestigated?” asks Yiatin Chu, Founder, Asian Wave Alliance.

There has been little to no coverage of her murder in New York City. Many people, including family and friends, have taken to online websites such as Twitter to question the lack of coverage and demand answers. In a tweet from her cousin Reza Islam, he said, “There are almost no articles or reports that can be found to help us understand what happened to this young woman.” Multiple accounts began to question why there was a lack of reporting and why the few stories being written were published so late.

Reports of Bangladeshi Americans being assaulted or killed in the United States are becoming more common as there is a rise in hate crimes against Asian and South Asian Americans.

In February, another Asian American woman suffered the same fate after being pushed onto the subway tracks at the 42nd Street Times Square station. In October 2021, a 51-year-old Bangladeshi male was fatally stabbed in the city.