On arrival, President Biden was welcomed by cultural performers who performed a Balinese dance. 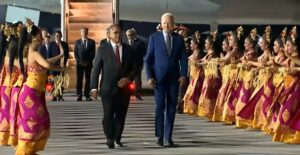 After attending the United Nations COP27 climate summit in Egypt and the ASEAN summit in Cambodia, Biden will meet with Chinese President Xi Jinping and other world leaders this week for the first time since entering the Oval Office to discuss a number of geopolitical issues, including the conflict in Ukraine, tensions in the Taiwan Strait, and the ongoing food, energy, and climate crises.

The White House announced on Thursday, November 10th, that Biden and Xi would discuss ways to strengthen relations between Washington and Beijing as tensions between the two countries remain high.

In a 3-hour-long meeting held on Monday, November 14th, the leaders discussed ways to prevent competition between the nations from turning into conflict. Their meeting in Bali to discuss geopolitical issues that have an impact on the entire global community was the first in-person communication between the leaders since Biden took office.

Shortly after arriving in Indonesia, it was revealed that Russian President Vladimir Putin would not be attending the summit the following week, erasing any lingering questions about whether Biden and the head of the Kremlin would have a meeting.

The U.S. is on high alert when it comes to its eastern enemy due to China’s failure to denounce Russia’s conflict in Ukraine, Xi’s strengthening friendship with Putin, and Beijing’s aggression in the region, including the launch of 26 airplanes and four naval vessels near Taiwan on Thursday.

Biden has struggled to toe the line when it comes to the American position on the island. The White House has confirmed that China’s hostility towards Taiwan was discussed in the meeting with President Xi on Monday.

At the summit, President Biden said, “As the leaders of our two nations, we share responsibility, in my view, to show that China and the United States can manage our differences, prevent competition from turning into conflict, and to find ways to work together on urgent global issues that require our mutual cooperation.”

Following Biden’s remarks, President Xi acknowledged that the current relationship between the nation was not up to par or meeting global expectations. Xi said, “So we need to chart the right course for the China-U.S. relationship. We need to find the right direction for the bilateral relationship going forward and elevate the relationship.”

With a full agenda planned for the week of events at the G20 summit, Indonesian President Joko Widodo stated his goals for the summit. The host said the summit should “deliver concrete partnerships that can help the world in its economic recovery.”