by Simon Ateba
in U.S.

Only Calls on Favorite Aligned Reporters

Many things at the White House are rigged, especially press briefings or press conferences. Questions are often sent in advance by the same set of reporters who get called on all the time. The President or the Press Secretary then reads prepared answers from a binder or a notebook with talking points.

For the people watching at home, it all appears to be normal, reporters asking questions and getting answers. In reality, it’s a show, a sham, the appearance of normality.

On Wednesday, President Joseph R. Biden Jr. who is turning 80 years old this month, held such a sham press conference at the State Dining Room in the White House, the day after his party showed surprising strength at the polls despite rising inflation, skyrocketing crime and widening divisions across the nation.

“I’ve been given a list of 10 people that I’m supposed to call on. And you’re all supposed to ask me one question, but I’m sure you’ll ask me more,” President Biden told a room full of local and international journalists. 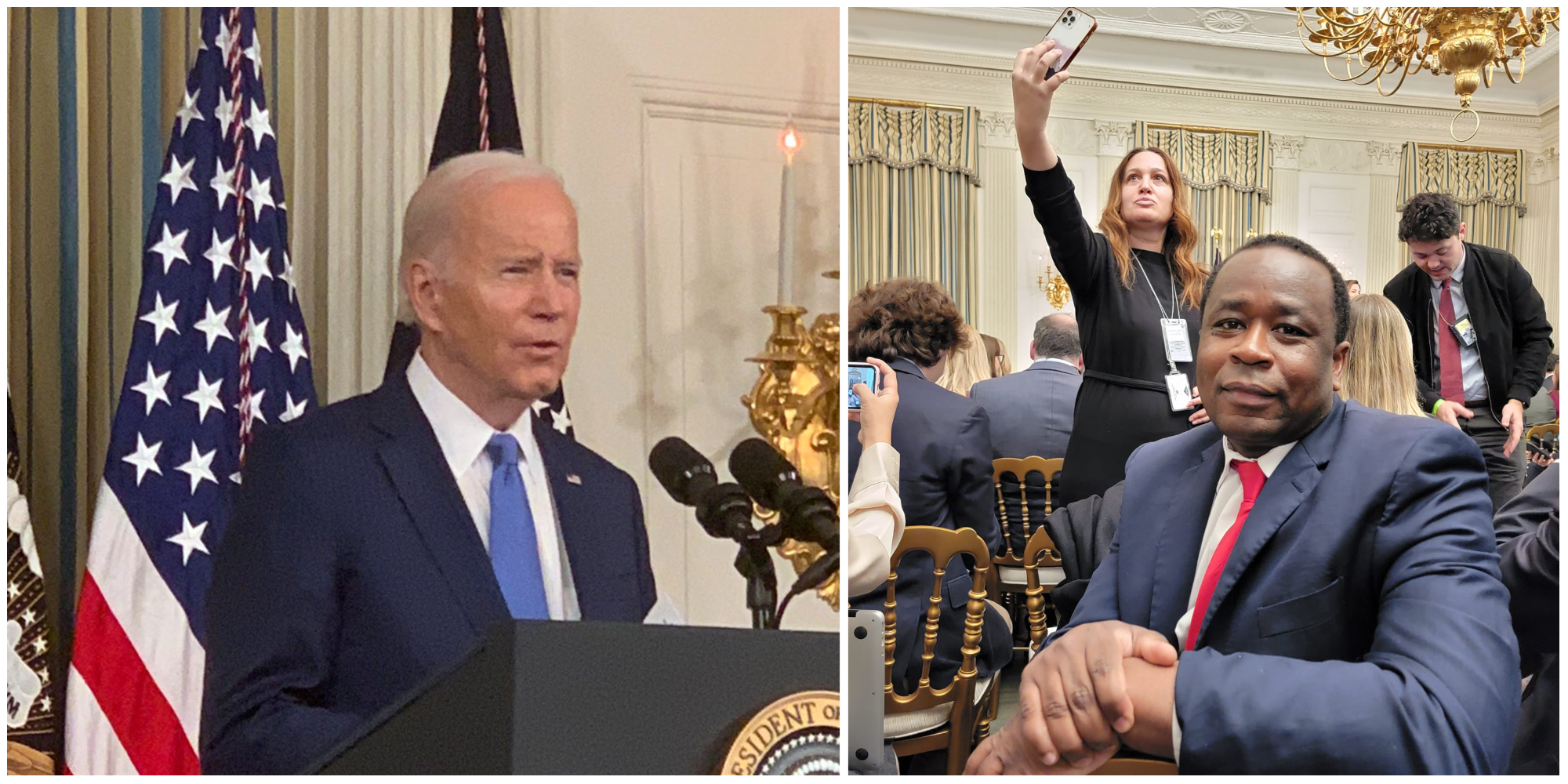 I was also there. It was the first time that I was allowed in. African reporters are never allowed in for Biden’s press conferences, even as he prepares to host about 50 African leaders in Washington next month to strengthen ties between the United States and Africa.

The room was full of white reporters. The White House is still 99.999 percent white, I noticed. There is very little diversity in there, even in the Biden administration. White House reporters are also mainly white, at least those who were in the room yesterday.

I found all of it strange and I moved a few seats to the front when I spotted a seat that had not been occupied. I was even attacked by a silly low-level reporter who seems to be on the decline, does not have a seat in the briefing room and asks questions most people find silly and dumb. I ignored him, it would have been a waste of my precious time, and I rather focused on the President.

When I first arrived in the United States, having watched CNN for years, I came to believe that the racists and the bad guys in the United States were the Republicans, the old white guys with no college degrees who live in the Midwest. But in the Biden White House, as I have struggled to get access, to ask questions, to be treated with the same dignity as others, I came to realize that the Republicans were not the racists and the horrible, awful people I was told they were.

“Our democracy has been tested in recent years. But with their votes, the American people have spoken and proven once again that democracy is who we are,” he said.

He added, “The states across the country saw record voter turnout.  And the heart and soul of our democracy — the voters, the poll workers, the election officials — they did their job and they fulfilled their duty, and apparently without much interference at all — without any interference, it looks like.  And that’s a testament, I think, to the American people.

“While we don’t know all of the results yet — at least, I don’t know them all yet — here’s what we do know. While the press and the pundits are predicting a giant red wave, it didn’t happen. And I know you were somewhat miffed by my — my (incessant) optimism, but I felt good during the whole process. I thought we were going to do fine.”

Mr. Biden acknowledged voters’ concerns about “the rising costs and the need to get inflation down.”

“There are still a lot of people hurting that are very concerned. And it’s about crime and public safety. And they sent a clear and unmistakable message that they want to preserve our democracy and protect the right to choose in this country,” he said.

President Biden’s central point was that the much touted ‘red wave’ did not happen, and voters sent him and his Democratic colleagues the feedback that they approve of his policies and he can seek another term in office. He is a man of faith and will make up his mind next year, he said.

Where the election stands:

Republicans were projected on Thursday morning to take control of the House of Representatives with a very slim majority but the much touted red wave that was predicted never happened.

As it stands, Republicans were projected to win just over 220 seats in the House of Representatives but in the Senate, several results were still too close to call to know who will control the highest chamber of Congress. At least 218 seats are needed to take control of the House and 51 seats are required to control the senate.

In Pennsylvania, John Fetterman flipped a key Republican-controlled senate seat, giving hope to Democrats that they may well retain control of the Senate with a very slim majority.

To control the Senate, it appeared on Wednesday morning that it will all come down to Georgia where Republican Herschel Walker and Democrat Raphael Warnock were locked in a tight Senate race that is headed for a runoff next month.

In the end, Democrats performed above expectations in the midterms and Republicans underperformed. The only state where a Republican victory was decisive was in Florida.

There, Republicans shellacked Democrats in statewide elections for governor and senator on Tuesday, with Ron DeSantis positioning himself to run for President in 2024, undermining former President Donald J. Trump.

The big winner of the night seemed to be President Joseph R. Biden Jr. while former President Donald J. Trump is one of the biggest losers of the night with many of the candidates that he endorsed losing, except perhaps in Ohio where JD Vance won his senate race against Democrat Tim Ryan.

The party in power often loses seats in the midterms, especially in the first term of the new president, but President Biden’s party has performed very well and calls for him not to seek re-election may now be difficult to make.

The full transcript of President Biden’s press briefing as released by the White House can be found below. As for African reporters, don’t expect them to get called on yet, even as President Biden prepares to host African leaders in Washington in December.

For more news from Today News Africa or to subscribe, visit TodayNewsAfrica.com 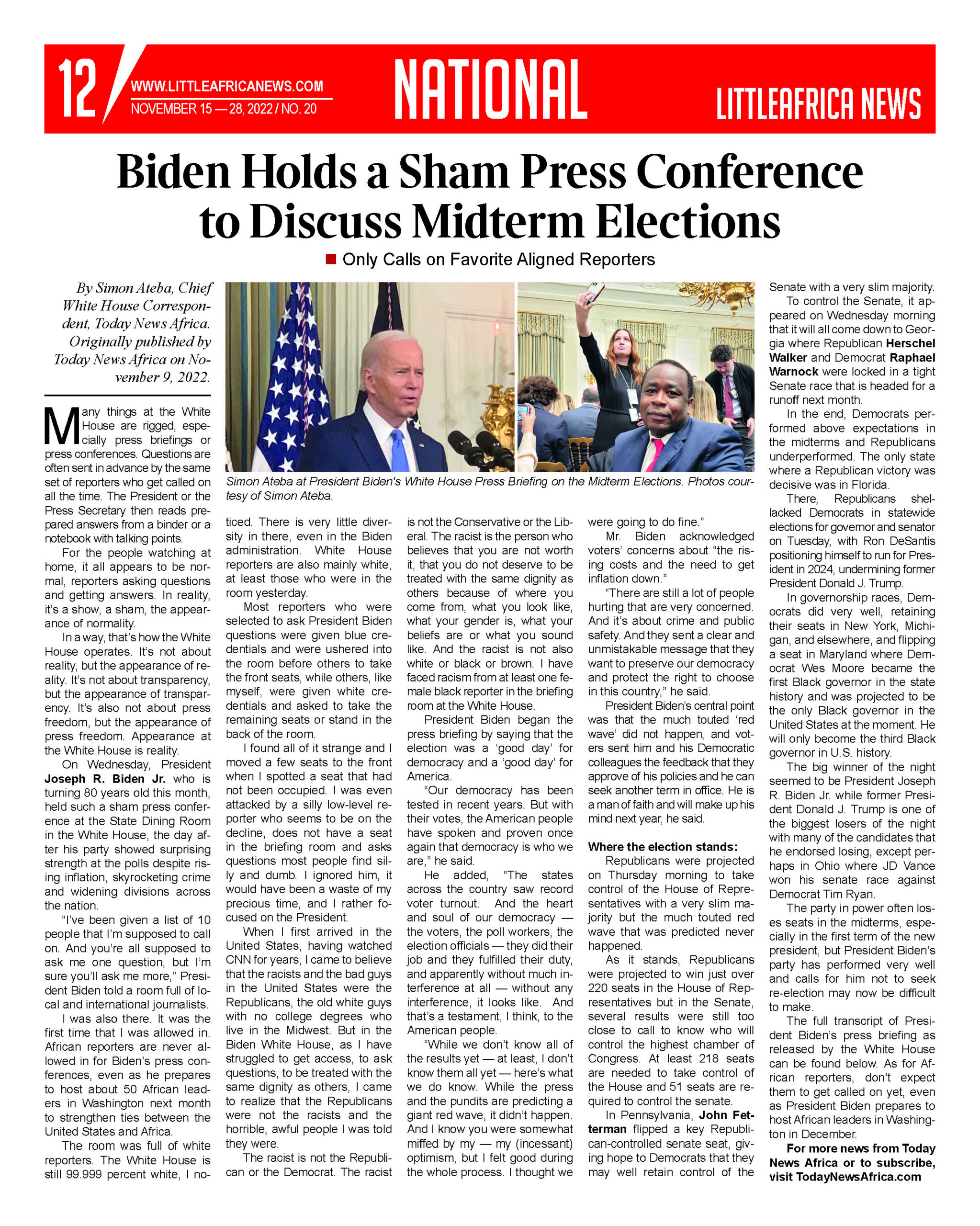