Antonio Delgado, Governor Hochul’s New Choice as Lt. Governor, May Have Credibility Issues Regarding His Background

Governor Kathy Hochul announced on Tuesday, May 3 that she had chosen Representative Antonio Delgado as her Lieutenant Governor. Delgado will sit in the second-highest office in the state and will serve as Hochul’s running mate in the upcoming Democratic primaries. Delgado steps into this role as a replacement for Brian Benjamin, who was forced to step down after being indicted on bribery charges.

Delgado is a native of Upstate New York and has represented New York’s 19th  Congressional District since 2019. He is a well-learned person, boasting qualifications from Colgate University, Oxford University in England, and a law degree from Harvard Law School. He practiced as a young lawyer in New York for a period of time before beginning his political career. Delgado once dabbled in the music industry, starting his own label and releasing an album titled Painfully Free. This is what led to him being referred to as a “big-city rapper” by Republican opponents.

Delgado is married with twin sons. He identifies as an African-American and Afro-Latino even though he has Cape Verdean heritage. Cape Verde, officially called Cabo Verde, is an African country that is a group of volcanic islands off the western coast of the continent. New York political circles are speculating that Hochul picked Delgado to appease the masses in an attempt to receive the Latino vote. 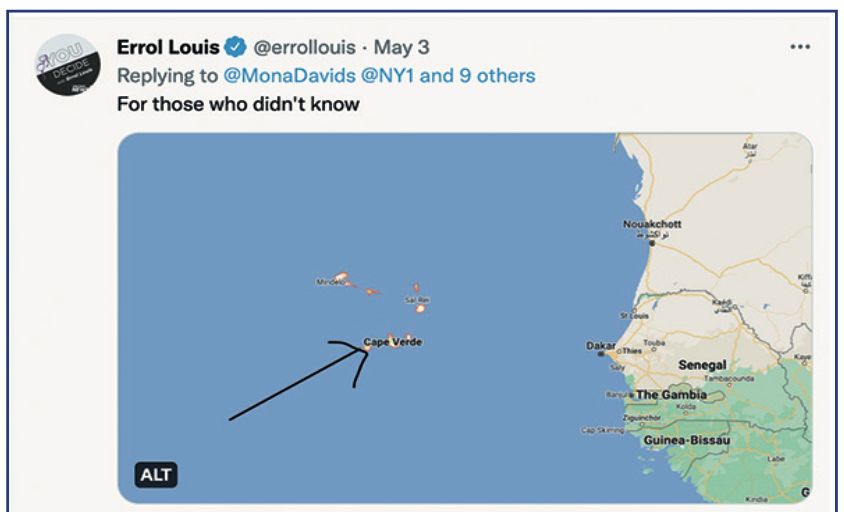 When asked at a press conference to clarify his heritage after questions were raised by LittleAfrica News founder Mona Davids, Latino community leaders, and political reporters on social media, Delgado stated:

“Because of my name, Antonio Ramón Delgado, maybe because I also played basketball a little while in Puerto Rico, and I love my Puerto Rican brothers and sisters, I really do, but I’m not Puerto Rican, but, you know, Afro-Latino, I think the Cape-Verdean aspect of that is certainly a part of my identity.” 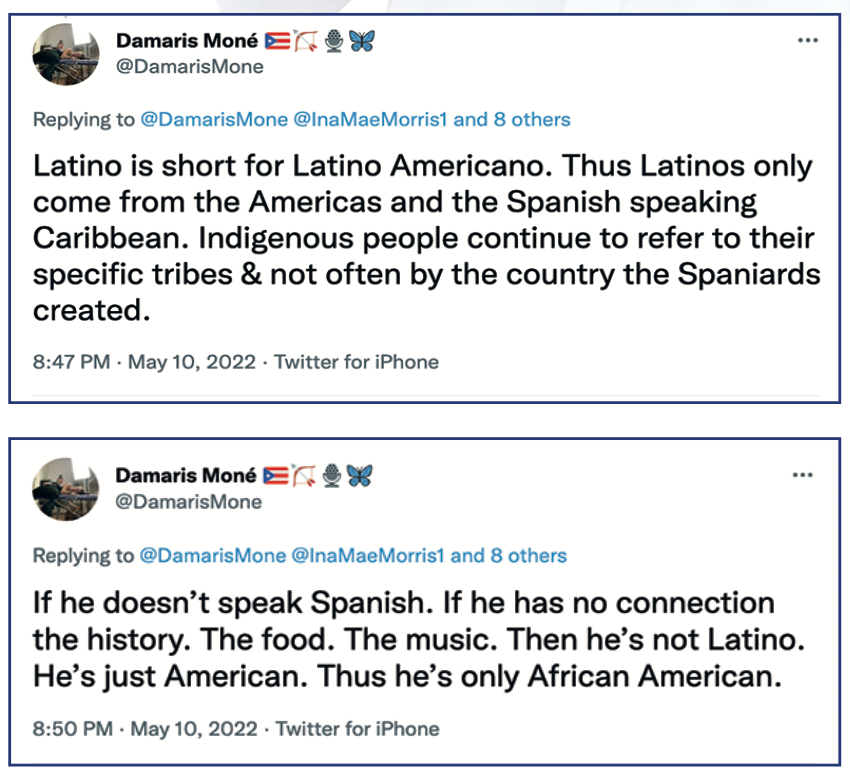 Unlike Delgado, Cape Verdians, Angolans, Mozambicans, Guinea-Bissauan, and São Toméan do not call themselves Latinos because they are Africans. Errol Louis, renowned host of Inside City Hall, Harvard educated like Delgado, posted a map on his Twitter account to show where Cape Verde is located. 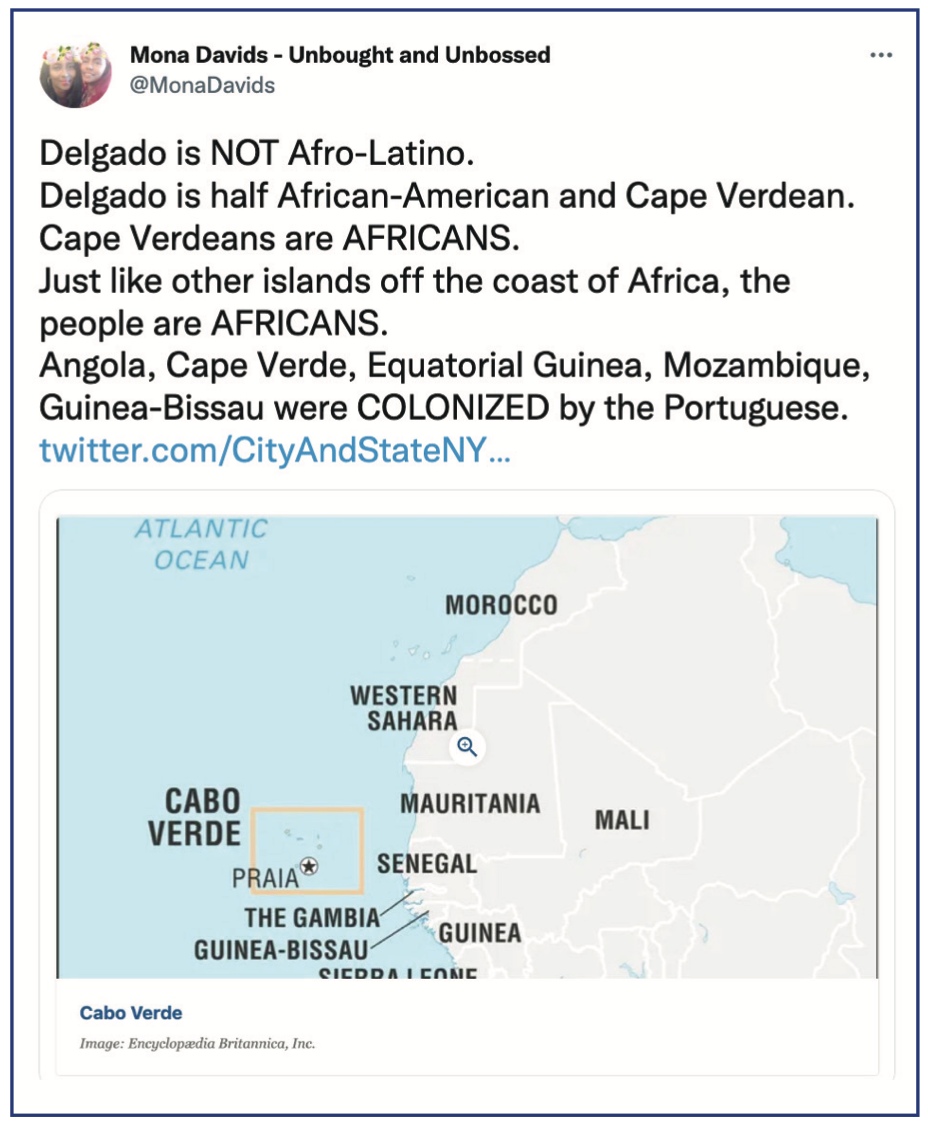 Mona Davids, a political consultant and the founder of LittleAfrica News, was perplexed as to why Delgado refused to admit thatCape Verdeans are Africans with no connection to Latin America. In reviewed correspondence and campaign materials, Delgado always claimed to be Afro-Latino or Latino and was never questioned as to explain his claim. Although Delgado’s congressional district did have more Latinos than African-Americans. Identifying as Latino for political or professional expediency is not uncommon.

Many Latino elected officials, Latino community leaders, and Latino organizations endorsed Delgado for his Congressional races because they were led to believe Delgado was Latino. Many including former New York City Councilwoman and Speaker, Melissa Mark-Viverito, were misled into believing Delgado was Puerto Rican or Latino. 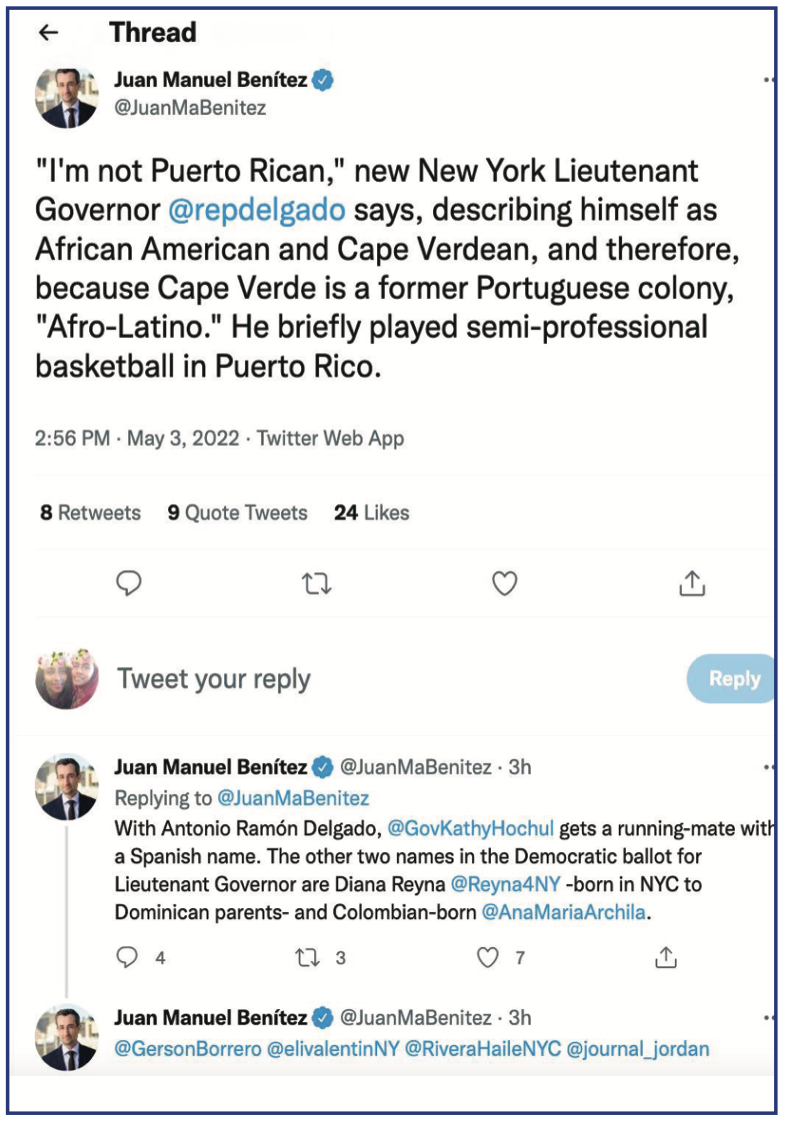 After requests from the NY Post for Delgado to precisely clarify his claim to being Latino.  Governor Hochul’s office — not Delgado — sent a statement stating that Delgado’s maternal grandfather who did not have a relationship with his mother is of Venezuelan, Colombian, and Mexican background.

Delgado’s newly launched website for Lieutenant Governor makes no mention of his heritage nor does it state he is Latino.

However, this does not change the fact that Cape Verde is an African country and Cape Verdeans are Africans — not Latinos.