On Saturday, September 10th, Affinity by Molina Healthcare and The African Advisory Council (AAC) held a Resource Fair for the migrants that have recently come to New York. The fair was held at the Burkina Faso Community Center located at 308 East 149 Street in the Bronx. 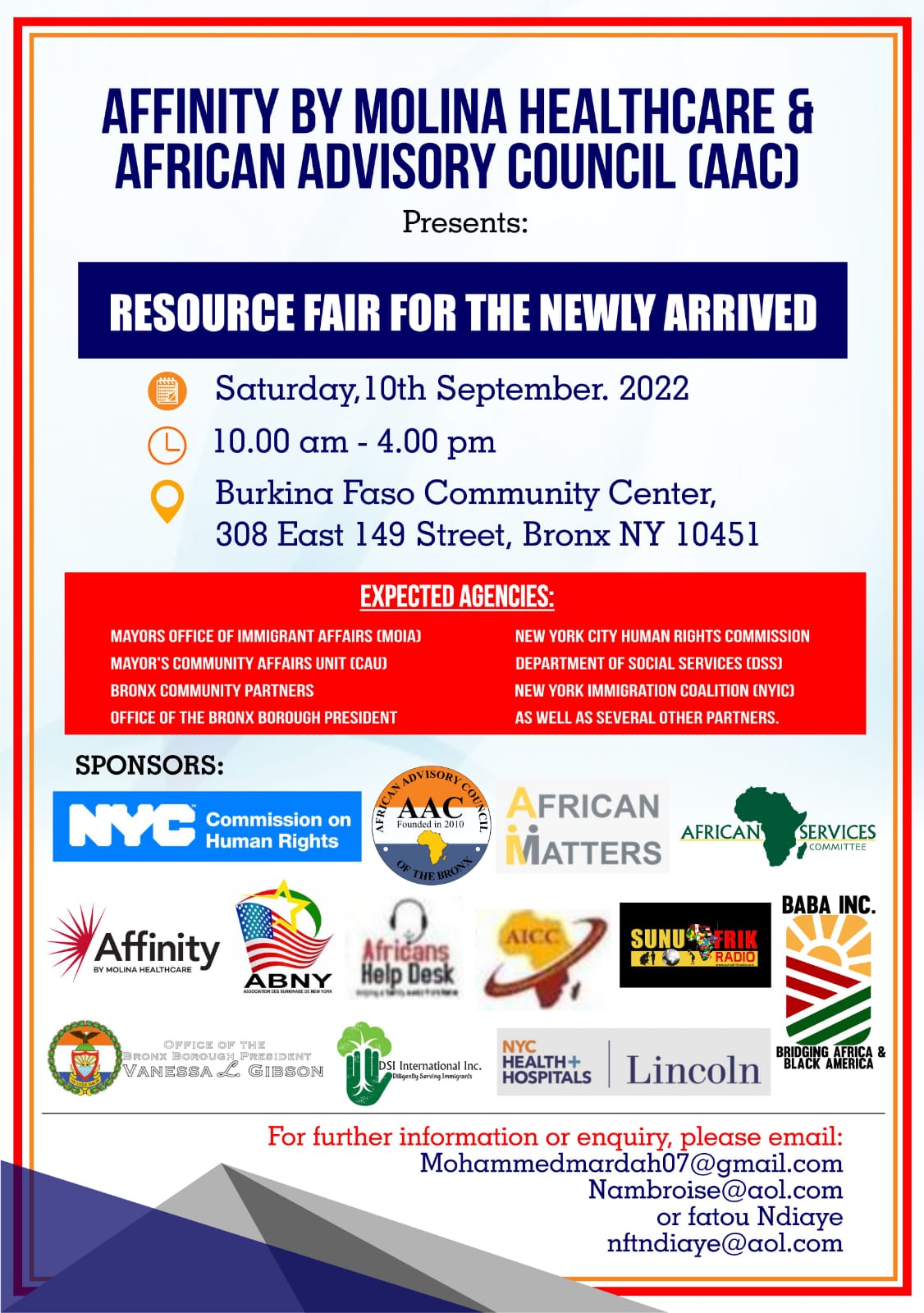 Several city agencies including the Mayor’s Office of Immigration Affairs (MOIA), the Department of Social Services, and the New York Immigration Coalition were present at the event. The event was sponsored by several organizations including the NYC Commission on Human Rights, Africans Help Desk, the Association of the Burkinabe in New York, African Matters, SunuAfrik, the African Services Committee, and others.

Mohammed Mardah, Chairman of the African Advisory Council, helped organize the event. Mardah said that the fair was motivated by the fact not all people arriving in New York City were receiving assistance. In an interview with LittleAfrica News, he said, “The motivation for the event came from the fact that we were seeing other communities who were arriving from the Southern Border getting resources and services for their transition here in New York City. We found out that when the Governor of Texas decided to send migrants on buses to ‘Sanctuary Cities’, New York City had to take steps to accommodate these new arrivals. Shelters, food, and other basic essentials had to be provided for them,” he said.

“Meanwhile, most of our brothers and sisters who had arrived were sleeping in mosques, churches, and with friends. In one mosque in the Bronx, there were so many that the Imam had to put out tents in the backyard for them to sleep. It was really a sad and unfortunate situation. Therefore, this event is meant to expose the new arrivals to all the various resources available to them, and most of it is free,” Mardah added.

He said that the fair is also meant to serve as a guide for the new arrivals to learn about the different agencies in the city and the various services they offer. 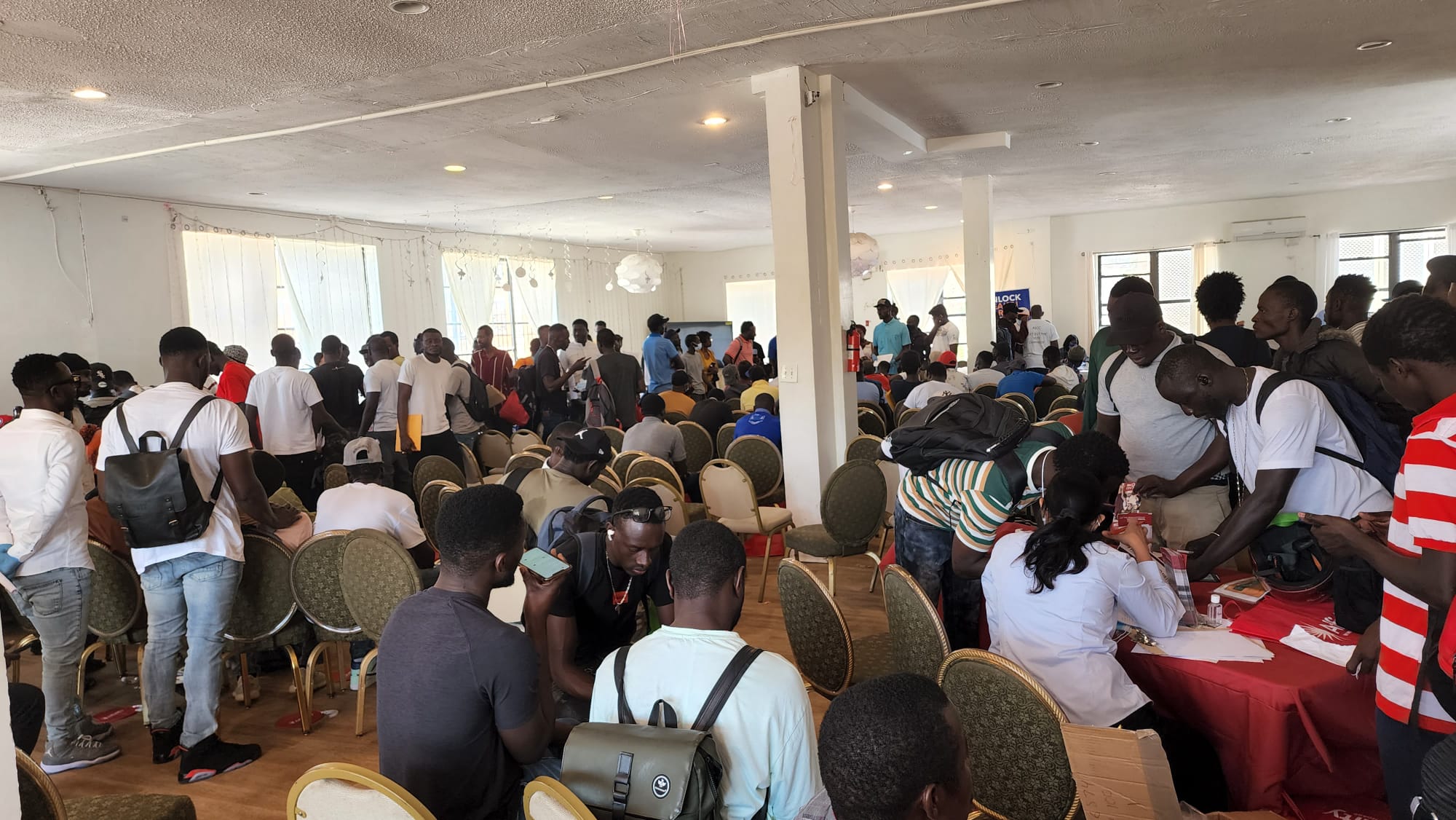 Mardah said the fair was a resounding success. He stated that nearly 500 people attended the fair even though they had only prepared for an audience of 200. While many migrants attended the event, most of the attendees were Senegalese. Each agency present at the event had a table with its representatives where people could ask questions and receive information.

Mardah, who spoke to the crowd during the event, was assisted by Fatou Ndiaye, who translated his words into French as a large portion of the people present at the fair understood French.

Ambroise Ngande, an active player in New York’s African community and also a member of the African Advisory Council, also played a role in organizing the event. When talking about the event, he said he believes that in times of distress, people who share a commonality must step forward and help one another. In these instances, new arrivals of African descent in the city needed assistance.

Ngande called the Resource Fair a special event because it ensures that those seeking help would be under the same roof as the agencies that could lend a helping hand. He stressed the need for integration. He noted that it is already tough traveling in what can only be described as a difficult journey but then when one arrives in the new location, they have to adapt. People will have to integrate into a new environment, culture, and way of living and often need assistance in instances like that, he emphasized.

*Mona Davids is founder and publisher of LittleAfrica News and the founder of African Matters.