Mayor Eric Adams’ Administration announced plans to install tent structures that will serve as centers catering to the increasing numbers of migrants in New York City on Thursday, September 22nd. The structures are called “Humanitarian Emergency Response and Relief Centers.” The city announced that they intended to open two of the structures, with one strictly for adults while the other would be designed to cater to families with children. 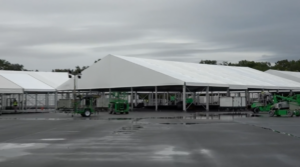 While the tents were being constructed for an October opening, New York City was hit with remnants of Hurricane Ian, causing flooding to many areas of New York, including the parking lot of Orchard Beach. During protests against the tents on Saturday, October 1st, protestors witnessed water levels rising in the parking lot as the “weatherproof” tent being built to house migrants flooded.

The centers will assist new arrivals with shelter, food, and medical care amongst other provisions. The photos from the press release show that the tents will be an open plan similar to a college dormitory and will be equipped with cots to be used as beds.

“More than 100 years ago, Ellis Island opened its doors to welcome in those ‘yearning to breathe free,’” said Adams, referring to the arrival of immigrants on the shores of New York City over a century ago. “Now, more than ever, it’s clear that we are again dealing with a humanitarian crisis created by human hands.”

“While other leaders have abdicated their moral duty to support arriving asylum seekers, New York City refuses to do so,” he added, taking a shot at the governors of the southern border states sending migrants to northern Democrat-run states.

As previously reported, the city has seen the arrival of thousands of migrants in the last few months. Reports estimate that there are approximately 15,000 migrants who have arrived in the city over the last few months. The majority of migrants are arriving on buses from the southern border states. These migrants are mostly South Americans searching for a better life in the US. New York City’s entrenched right to provide all with shelter means the city has had to unexpectedly provide all migrants with accommodations. This has created somewhat of a crisis in the city.

According to reports, Adams’ administration has already broken the law more than once by failing to provide asylum seekers with accommodations within the prescribed period, primarily by allowing those seeking shelter to sleep in intake offices.

The organizations that cater to shelter migrants and asylum seekers were not impressed by the mayor’s plan to install tent structures. The criticism from these quarters was firm and scathing, with a joint statement released by the Legal Aid Society and the Coalition for the Homeless. “We are deeply concerned with any scenario in which families with children would be relegated to congregate settings,” the groups said.

“This practice, which has been widely condemned for its adverse and dangerous impact on this uniquely vulnerable population, is already subject to legal prohibitions.” An attorney with the Legal Aid Society said that the city had informed them about the plan but had not given them specific details.

The two groups also expressed concern over whether the structures would be suitable for people and children to live in. The mayor’s office released photographs of what the structures would look like with some critics labeling them as “short-term municipal refugee camps.”

The Orchard Beach location of the Humanitarian Emergency Response and Relief Centers is expected to open in early October, most likely in the first week of the month.

In another move that is unorthodox, the Adams Administration announced that it was close to securing a cruise ship from a Norwegian company for the purpose of processing and housing migrants before they are placed in the city’s shelter system. The use of the cruise ship has been labeled as temporary, with reports indicating it will be in operation for six months. The cruise ship will be docked at Staten Island’s Homeport.

City Hall is reported to have been in negotiations with Estonian company, Tallink, over the use of a cruise ship of theirs. The intention to place people on cruise ships has split opinions. “I don’t think it allows people to become involved in society as equal people. You’ve labeled them and then all of a sudden it just puts everybody three steps backward towards any kind of assimilation,” said a resident of Staten Island, who saw the idea as “unsustainable.”